ipod in my ears. doing laps on my bike, trying to rid myself of this damn flu bug and sadness i've had for the past few days. i never used to get sick. i could go for years without ever taking a sick day. lately i think it has to do with my stress level. stress high = lowered immune system = time to make tea, take xtra vitamins and  drink that therau-flu. and so i push myself...riding hard...to metallica, korn, seether, tool. i like when staind comes on cause their songs can be a little depressing and that fits my mood. i can play the song 'cancer' by my chemical romance over and over...making my self cry...over and over. only to be soothed by  deuter or sigur ros...but it doesn't last. i don't want to be soothed right now. i don't wanna calm down. i want to YELL! scream! but instead i turn the volume UP...switch to just the hard rock...and push on... it's july. my dad's birthday was in july. so was my sister's. dad passed away in '01 (prostate cancer). luckily he passed away a few months before 9-11, cause THAT would've killed him for sure. with my dad on his death bed...not  able to speak anymore...but still aware during moments of lucidity that crept around the edges of the morphine...he tried to reach out for me and i could hear that 'V' sound trying to form from somewhere deep in him...i could see his lips trying to form the word...love. he was finally trying to say 'i love you'. i'd never heard that before. not from him. it was an image that has never left me. even to this day. it makes me cry. my sister sally and i used to talk alot about dad after he passed away. how sad we thought his life was. his wife, our lunatic mother, had passed away a number of years earlier and although dad did miss her, at least he was finally able to be himself. after dad passed away, i heard 'stories' about dad wanting a divorce and mom telling him NO, that if he tried to divorce her she'd take the three kids and kill herself and them. and so, my entire childhood i never witnessed a hug...kiss...hand holding...not ONE gesture of affection between my parents. getting back to sally. we used to talk about our lives. our mistakes. what we love and what we hate. we were very different people...but we understood our differences and we were always there for each other. through all the rough times with my 2 sons...drugs, jail, rehab...she never left my side. even though my brother-in-law had told sally to stop sending birthday cards to my 2 boys...i guess he didn't want his wife to have anything to do with her fucked up sister's family. sally told me she just couldn't do that! she was too caring...forgiving. and  i feel like i was always there for sally too...whenever she needed a shoulder to cry on...or lean on...or someone she could say anything to...without any judgement...i was just a phone call away. sally was the youngest of the 3 kids. 3 years younger than me. our brother andy was 2 years younger than me. in 2007 sally lost her battle to breast cancer. i was living 2 1/2  hours away...cancelled all my appointments until further notice...and went to sally's...to help her and her family...with cleaning, cooking, anything they might need help with! when sally was moved from home to hospice, we knew the end was near. i was trying to stay strong, but it was tough. sally had 3 young girls...she was my little sister...i was always the wild, crazy one...why did this have to be happening?! so i called sally's good friend who lived across the country...and our brother andy...and told them they better get there quick if they wanted to see sally before she passed away. when andy  arrived...my brother-in-law and middle niece got these screwed up looks on their faces and said "who called uncle andy? who told him to come?" > like they didn't know it was ME? i said "i did! he's our brother!"  it's funny the things that stick in your head. i wish i could get around it, but i can't. so there we were... andy and i were the only ones left of our immediate family. of everyone, andy and i were the closest. we were like the black sheep of the family. we stuck together. i told him "you better not fucking die cause i'm not going through this shit again! if anyone goes next, it's ME goddamnit!!" he didn't listen very well. the following year, in '07 he moved from NY to FL, with literally nothing but the clothes on his back and his 2 cats. he moved in with sam and i...a few months go by...he got a job...his own apartment...but he's not feeling well. anemic. bleeding inside. had to have transfusions. tests. more tests. the Drs thought maybe stomach ulcers. more tests. they're good at that! guessing and testing!! nope, not ulcers.  gastric cancer. a very aggressive cancer. from the first oncologist visit which i took him to...til he passed away in the hospital...was under a month. fuckfuckfuckfuck!!!!! what's going on? sure we had a pretty fucked up family...dysfunctional to the point of hilarious...but they're dropping like flies all around me! what did i do to deserve this?! hey you're probably thinking, shit, girl, you better be careful yourself...sounds like you have a family history of cancer.well,  i was adopted. so was andy. > maybe it was something in the water?
anyway...i feel better now. even if no one reads this...it was very therapeutic to GET IT OUT!
OH yeah, one last thing...they say if you find feathers...that it's someone's spirit you were close to...letting you know they're still here for you. today i found 2 feathers. well, sam found one and i found the other. but i think we know who they're from and who they were meant for. 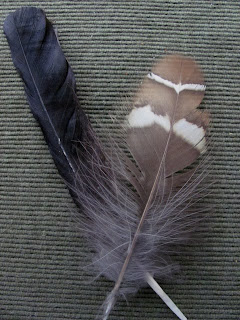 it's one thing to lose your parents. i mean, not that you WANT that to happen...right?! but when you lose your brother...sister...the ones that knew you the longest...of anyone else on earth. THAT sucks! i've never been good at all the 'family' stuff. the get-togethers. holidays. i always felt uncomfortable. like an outsider. like i didn't belong. i spent such a huge part of my life molding myself into what i thought i had to be...like a sponge. i thought my purpose was to BE loved...and i would do anything to make someone happy. to love me. for that huge part of my life...i didn't know who i was. i'm still learning. i'm still a little confused. OH, and  i may not say it enough, but i need to thank sam MORE than i do...for putting up with my depressing mood swings...for TRULY understanding what i'm going through...and for trying to make my life happier. you do. i love you.
so i think i'll switch over to my soothing...peaceful tracks now and go for a leisurely ride...
Our brothers and sisters are there with us
from the dawn of our personal stories
to the inevitable dusk.
laura
Posted by laurak/ForestWalkArt :)