snake! eating! rat!
i've been meaning to put these pictures here for the past couple of weeks...was a little undecided whether i should or not. but decided to!  i have a snake...a Ball Python...named Monty! (yeah, Monty Python...original, huh!?)  he's about 12 years old...has escaped from his tank, only to be found a couple of weeks later...twice! he eats live rats. have you ever seen a constrictor catch his prey and swallow it? well, yeah, you probably have...on tv?  here are pictures i took the last time Monty ate. Bon Appetit! 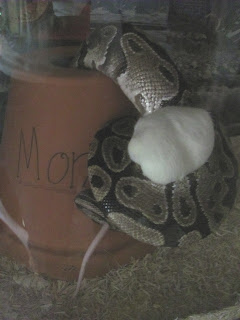 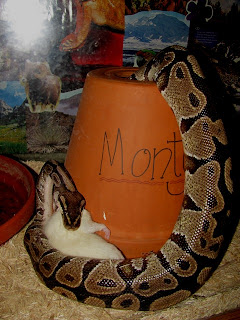 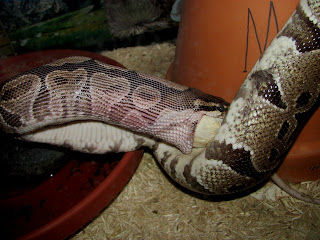 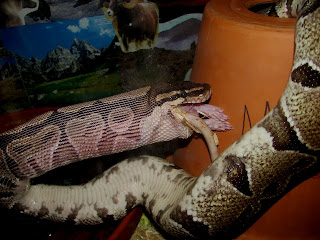 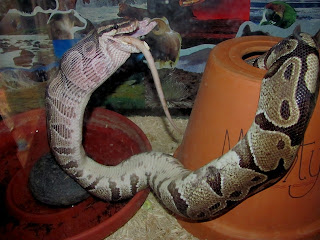 FINI!!
Ball Pythons make good pets if you're looking for a snake. they don't get too big to handle and they're pretty docile. they're called 'Ball' pythons because sometimes they curl up around themselves...in a ball. they like to hide...we used to use a  cardboard box with a couple of holes cut out...and then we'd change it out for a new box every now and then because it could get a little messy inside...when he 'poops' the rat waste out! we finally decided to go with the terracotta planter you see in his tank. we got a BIG one...used a dremel tool to make the hole in the bottom big enough for him to fit through. then we just turned it upside down so there's no bottom on it...it's easier to clean, just lift it out!  and it's heavy enough that he doesn't knock it over.  go here to read more about ball pythons. did i leave out anything important?? do you have a snake? a ball python? have any other info?? let me know>>>>>>
Posted by laurak/ForestWalkArt :)