SOME of the following PICTURES are NOT for EVERYONE!
BE FOREWARNED!
yesterday i went out on the 4 wheeler...bone hunting. i already knew where i was headed since i had seen some deer bones left by hunters, on my previous bone collecting ventures!! i didn't pick them up then...because mother nature, vultures and ants still had a little work to do! i don't usually pick up bones that are still 'meaty'. why, you ask??  the stink!  BUT i've lost some perfectly good skulls because of that! i left them for further cleansing by mother nature...and some...scavenger...dragged off the skulls...bones...i never found them. and so...as horrid as it may sound...i've started picking up roadkill. just neighborhood roadkill...on my street, roadkill. i'm NOT (yet) pulling over to the side of the road while driving around  town...and scraping up a dog, cat or possum!

anyway, if this is your first time here...reading my blog...at this point you're probably wondering what the hell am i collecting bones for anyway! i decorate them! take a look at the stream of pic's- upper right corner of  this blog...and you'll see skulls, jawbones, lots of  bone art!! even after mother nature has done her job of cleaning...there's still more to do. depending on how much is still  on the bones...i either boil them (outdoors!!) or lay them out (covered) so the bugs can help me out. anyway...the final step is a little peroxide...then bleach and water...lay them out in the sun to dry!

first i headed for the scattering of deer bones i'd spotted before... 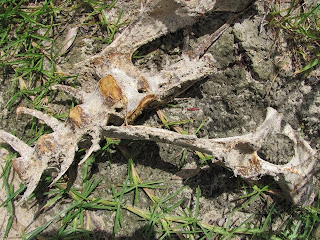 in a few different locations... 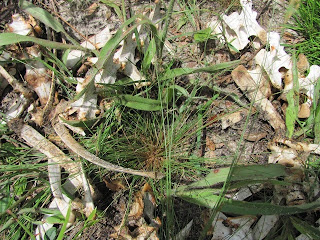 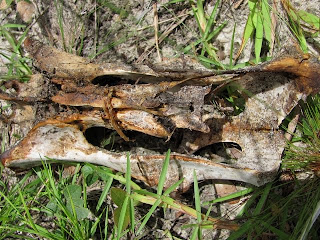 i collected some of the smaller bones...vertebrae...ribs...then left the field and headed for the main road. after i got on the street...passing another field to my right...i saw these two deer. i grabbed my camera and hoped they'd stay for their picture! they did! 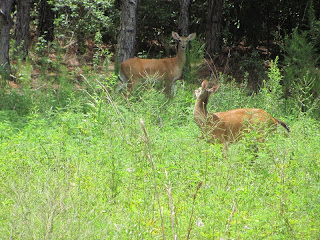 this was an unexpected sight! it was noon! we don't usually see deer in the middle of the day like that!!

farther up the road...i smelled something...dead. it was an armadillo. 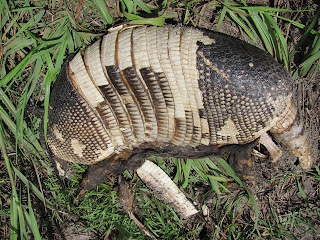 it's hard to see in the picture...but the skull is still attached. using my handy folding shovel, i moved it closer to the tree line so nothing would run over it! i'd come back later with a bucket...and collect it!
then up around the corner...close to home...there was a young raccoon...squashed. 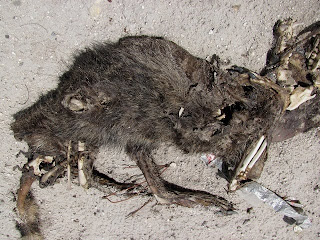 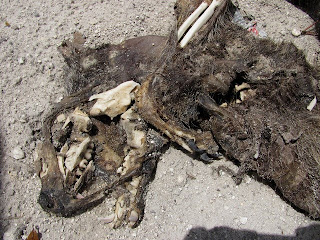 the skull looks pretty crushed...but i can still get some teeth. maybe more. maybe a jawbone. i won't know til it's cleaned. i'll pick this up later with the bucket too...

so now, after rushing home with my finds...talking sam into taking me back to the roadkill with bucket in hand...the armadillo and raccoon are laid out, on the back of our property, covered with a grating so scavengers won't drag the bones away. the insects are working overtime!
i cleaned some of the smaller bones...now they're sun-drying. 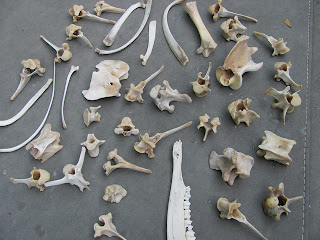 later this week the armadillo and raccoon will be ready for the pot. a little boiling...then pull off the rest of the skin and tendons. i know it seems a little weird...but i can't wait to work with those new bones! maybe YOU collect something?  (yeah, you...what are you passionate about collecting?)  and when you find that 'treasure'... you know what i mean...you get that tingle...a fluttering feeling in the pit of your stomach!  it's not really a hobby, more like an obsession. for me, besides bones...it can be a feather, rock, piece of weathered wood, an old bottle, shell, barnacles...anything unusual looking...old...from another time...with a history...a fossil...artifact!

i'm a collecting maniac...of these bits & pieces of nature and the past...