((before i begin...let me just say thankyou to EVERYONE for your words of support...comfort...and understanding (regarding my previous post).
i KNOW i'm not the ONLY one who feels this way...who has had losses...and, honestly...i felt BAD afterwards...kind of like i was being a 'whiner'...complaining and tossing my problems 'out there' for all to read. BUT...what's this 'blogger world' for...if not to express ourselves...in any way we feel necessary...at the moment.
anyway...what i'm trying to say without turning into a pile of MUSH...is...i REALLY appreciate everyone who stopped by...read...shared their thoughts...whether here in writing...or keeping silent and sending mental messages.
i received them all and i am so grateful!
thank you. NOW...after a relaxing weekend...a  new day...a new post...))  :]

>>Don't let yesterday use up too much of today.
~Cherokee Indian Proverb <<
-----------------------------------------------------------------------------
we went to Lochloosa Harbor  over the weekend. we've been there MANY times over the years...it's only about a 40 min drive going southeast...they're right there on the lake...camping...fishing.  time to relax.  unwind.
there's a small convenience store there at the campground...where we pick up our bait and ice.  i'm usually pretty good at remembering everything we need to take for the weekend...but this time i forgot the COFFEE!! YIKES!!!
...they have everything you might need in that little store...toilet paper, canned goods, snacks, beer, water, sandwiches, cooking oil, potatoes...and all things fishing...live bait, lures, line, nets...BUT NO COFFEE for sale!!
i had to FORCE myself to sleep in til 6am...when the store opens...so i could get a cup...or two...of the fresh brewed coffee they offer...for free!!
we got there late afternoon friday...set up the camper...picked up some bait...and headed out on the lake. we have a gheenoe...kind of like a canoe, but more stable...flat back with a 9hp motor. we can motor along or paddle...and able to get into real shallow areas.  we don't have lights on the boat, so we have to be off the water by dark.
the first 'wildlife' i spotted was the (usual) florida anole...at our campsite. 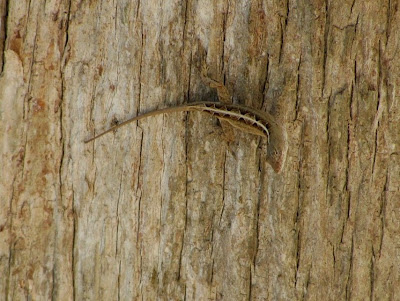 ...the sun sets...we're still cruising the lake...
these were taken right before we headed in to the dock.
same breathtaking  view right out our camper door...aaaaaaaaaahhh... 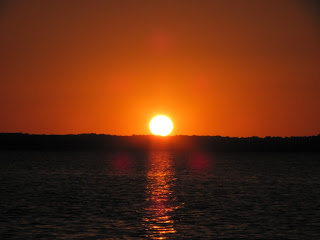 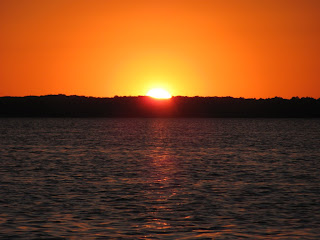 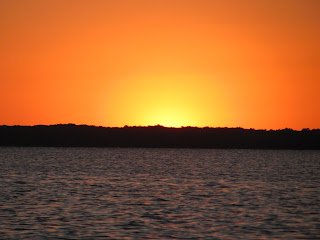 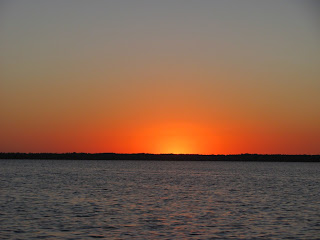 saturday morning, we saw smoke across the lake, coming from 'Burnt Island'. it's not really an island, but a protrusion of land into the lake...mainly a wildlife management area.
in florida...there are 'controlled burns or prescribed fires', and we were hoping that's what was going on...and not a 'wildfire'.  (we did hear the next day that it was a prescribed fire) 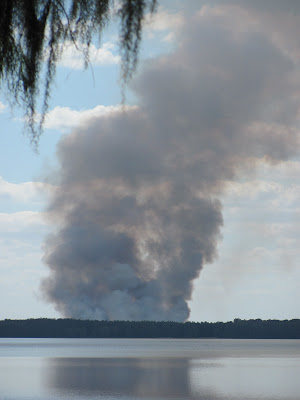 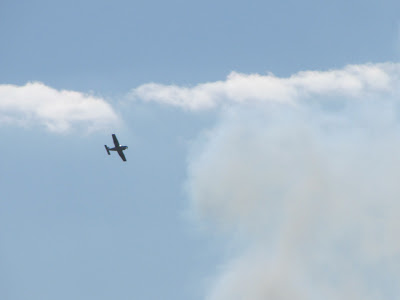 that small plane circled for HOURS...making sure the fire was staying under control. 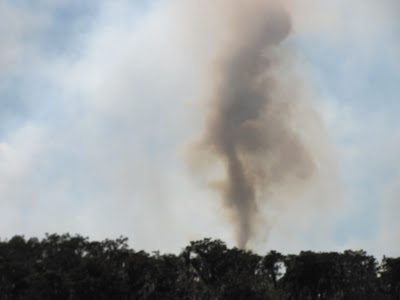 look at that tornado looking thing in the center!!!
it's a vortex/swirl of HOT smoke!
we tried fishing...i say 'tried' because we're usually not too lucky in the 'catching' department. BUT we have fun anyway...riding around...adventuring!  some of our catches are probably small enough to be considered 'bait' to some people! ha!  we DID catch a few bigger ones this time though. specks...nice and fat! yum! 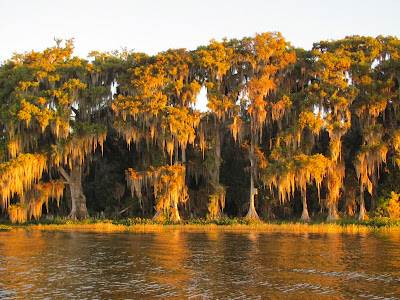 cypress trees, with spanish moss hanging...reflections of the morning sunrise... 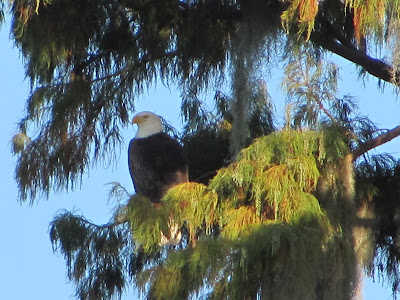 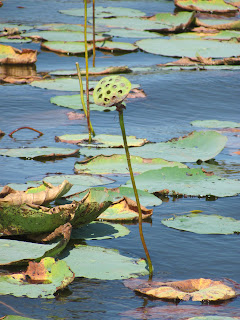 sam and i agreed...we've never seen these odd looking lilly pads before...
with the large seeds in the head...
((nov 2- thanks to 2 comments...i was told these are LOTUS seeds! i've taken pic's of the Lotus before...on lakes...guess i just never saw them in this stage...BEFORE they become lotus flowers!! cool!)) 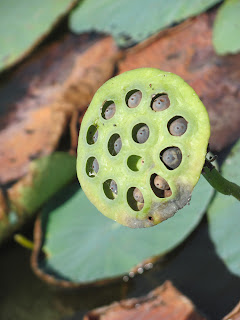 there were so many butterflies...dragonflies...i wanted to get pic's...
but they never seemed to sit still...constantly on the move...
OH!! we did see three otters walking along the shore...while we were fishing. but by the time i got the camera out...they were behind a thicket of weeds...we could see alot of commotion going on back there...the weeds moving all over the place. then they finally emerged and continued down the shore...dragging a long snake!! by then the camera had already powered down...and they were running like mad. looking forward to feasting no doubt!! 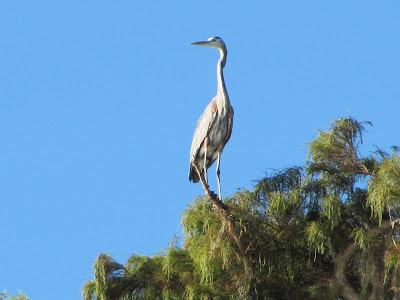 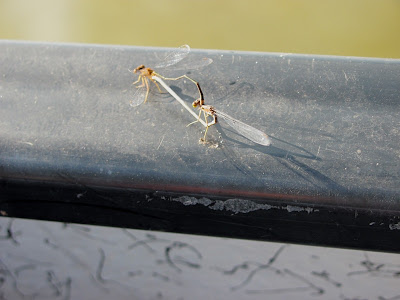 mating damselflies on the boat! 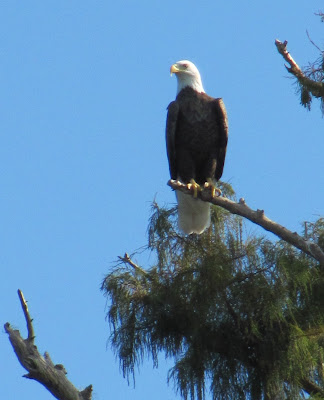 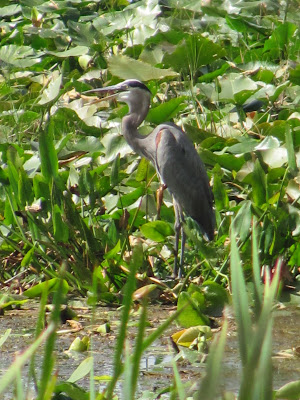 we thought it was really odd not seeing alligators all over the place!!  usually we see them crossing the lake...sunning themselves...occasionally trying to go after our bobbers.  not this trip!  we saw ONE gator! we asked at the office/store about the lack of gators and they said florida  (Florida Fish & Wildlife Commission??!!)  issued permits for 400 alligators to be  hunted & killed on lochloosa lake alone!  FOUR HUNDRED!!!!  that's  ridiculous!!!!  what a shame!! 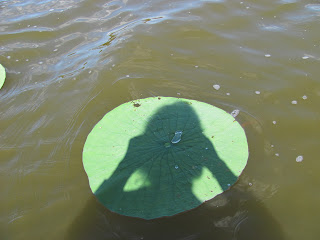 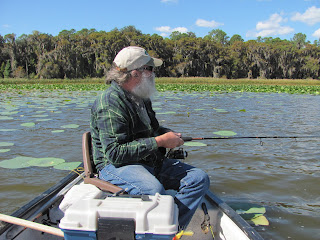 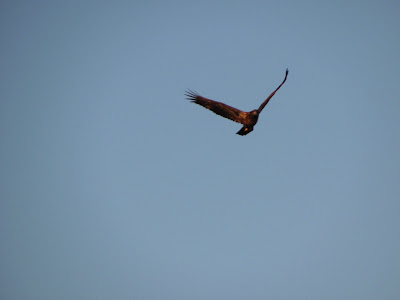 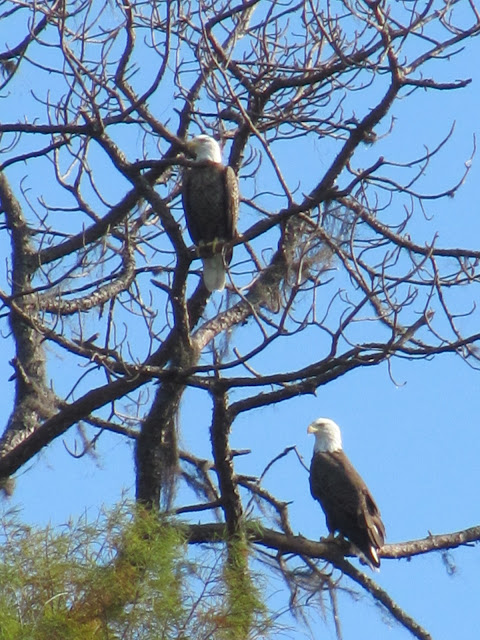 if you ever happen to be passing through this area...south of gainesville...north of ocala...in hawthorne, florida. stop by lochloosa lake. visit and stay with the folks at Lochloosa Harbor.
it's rustic. woodsy. full of wildlife. a great get away. 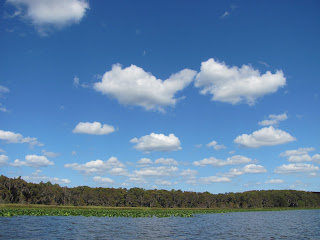 nature heals...even the toughest of us...
Man's heart away from nature becomes hard.
~Standing Bear
stay cool...laura  :]
Posted by laurak/ForestWalkArt :)