i have a pretty good collection of bones.
a pretty awesome collection actually.
yeah, many people think it's kind of weird...picking up a dead lizard...frog...
so i can save the skeleton after it's decayed.
i've even been known to bury fish heads...only to be dug up later for the bones.
a couple of times i collected road kill.
what would you say if i told you that sam has brought me
dead bugs...lizards, and the like...that he's found at work?!!
yeah. i'm easily pleased.  a cheap date?!  no expensive gifts needed.
just bring me some bones...skeletons...feathers...shells...
and i'm happy.  ha!
but most of the bones i find...are in neighborhood fields...
deer, hog...carcasses dumped after the hunters have filled their freezers.
sam and i found two dog skeletons in the field across the street a couple of years ago.
bullet holes in the skulls.
in this same field, we've also found raccoon bones & squirrel skulls.
i clean all the bones.
if there's any meat on them...i let nature finish first. between the weather...ants, maggots and vultures...there's not much for me to do except sanitize them. first i use peroxide... if there's any trace of meat...i use pliers to pull it off.
then a quick soak with diluted bleach.  rinse.  sun dry.
ANYWAY...recently,  i've had this urge to find an owl pellet.
we have a pair of barred owls that nest somewhere out back. just about every night we hear them hooting...calling to each other. not just the usual HOO-HOOT-HOO...but occasionally a louder 'monkey call'...HOO-WHAAAA-HOO. ((owl calls and sounds))  ((more sounds)) 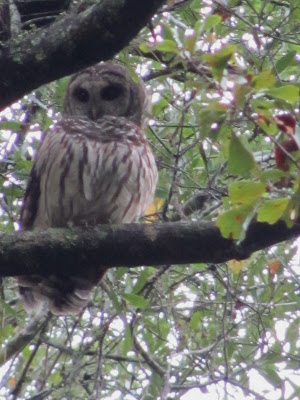 i took this picture this morning after hearing 'a murder of crows' squawking like crazy out back.  i had a feeling that they were trying to scare one of the owls away. we've seen this before. the owl was probably perched a little too close to their nests. sure enough, after following the sound of the crows...i saw this owl fly from one tree to another. to me, he looks a little frightened. the crows continued to badger him for a few more minutes...and then they all flew away. for some reason i always assumed this was the female...the smaller, more delicate looking of the two. but after looking up barred owl info...
the male is the smaller of the two. 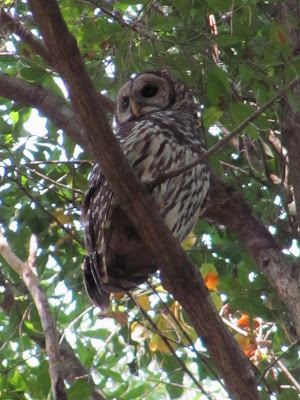 this owl is the one we see almost every day. the larger female i guess.
-o-o-o-o-o-o-o-o-o-o-
so...getting back to owl pellets. they cough them up...10 hours or more after eating a yummy meal of lizard, rat, mouse, mole...they regurgitate a slimy-ish pellet of the indigestible stuff.
undigested stuff...like BoNES!
"It's a dangerous business, Frodo, going out your door.
You step onto the road, and if you don't keep your feet,
there's no knowing where you might be swept off to."
~ Bilbo - J.R.R. Tolkien
a few weeks ago...i started searching under the limbs they usually perch on. with sam by my side...we'd scout the yard...the back woods...
for signs of where the owls like to hang out...their favorite limbs.
what signs, you may ask?  POOP!  owl poop under a tree.
where there's lots of owl poop...you just might be lucky enough to find a pellet!
-o-o-o-o-o-o-o-o-
FINALLY...last week, i found one! 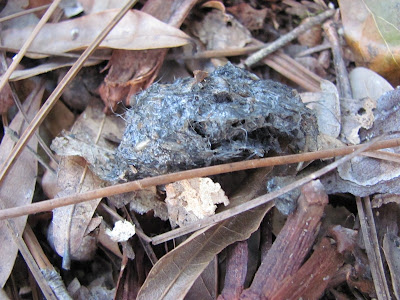 i was SOOOOO excited!!!!!
you can actually see fur and bones sticking out!!
so i stuck a stick in the ground to ID the spot...ran to grab gloves...and then carefully picked up my specimen for further inspection!
dissection time! 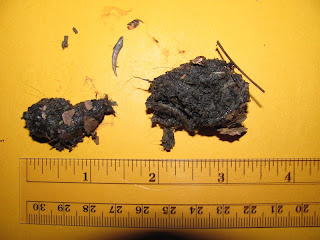 we found another, smaller pellet nearby. maybe it split apart when it hit the ground. 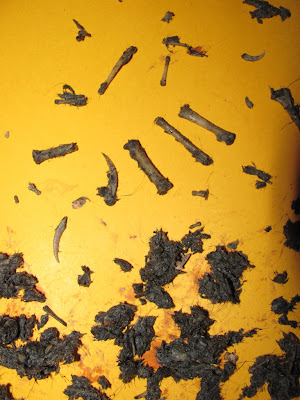 using an x-acto knife and tweezers, i began to dissect the pellet.
it was packed with bones...leg bones, rib bones, claws.
i was amazed!   and hooked!! 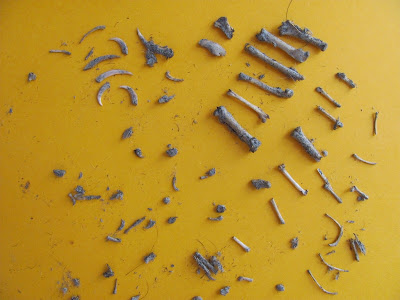 these are all the TINY (air-dried) bones picked out of those two pellets.
-o-o-o-o-o-o-o-o-o-o-
my new fascination with owl pellets...and these tiny bones....
has us searching after work...each evening...
for these little masses of regurgitated undigested owl food.
we also found what might have been the remains of a pellet that disintegrated.
sam spotted a pile of tiny assorted bones, just under a layer of pine needles.
they look liked they've been there for a while...
sun bleached...white. and in the same area where the owls frequent. 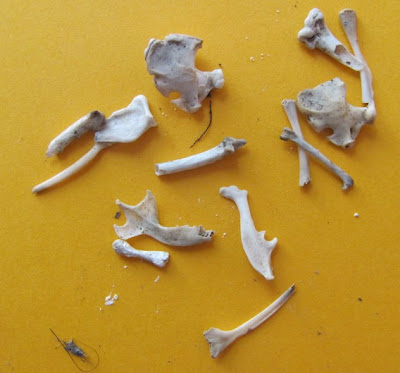 so what am i going to do with these tiniest bones?
i'm not sure yet. after cleaning them up...
probably put them in a jar...
maybe do some miniature 'bone doodles'...or, if i can part with them...
make little  vial necklaces  like i did with the smallest armadillo & raccoon bones.
The poetry of the earth is never dead.  ~John Keats
well, cool weather is on it's way...yay!
leaves falling to the ground.  crunching under foot.
soon, we'll be able to venture farther out back.
when the vines and all the underbrush start to die out...
and the ticks aren't hungrily waiting...
we'll do some exploring. always something new to see...
no matter how many times we've wandered the same path...
nothing in nature stands still for very long....
nothing remains the same.
In every walk with nature one receives far more than he seeks.
~ John Muir
'til later, stay cool...laura   :]
Posted by laurak/ForestWalkArt :)