all of a sudden, it's cooler here. in the 30's at night and low 60's during the day.
BUT it's supposed to warm up during the week.
this kind of weather confuses the trees...the critters.
the leaves are asking themselves if they should continue to fall off the branches...
leaving the limbs bare and shivering.
some of the little critters are wondering if they should go into hibernation mode.
and the flowering plants...they're trying to decide  if it's worth the effort...should they show their spring colors?? or conserve energy and stay dormant for now?
for the most part...here in our yard...the ground is blanketed with fallen...dry leaves.
and acorns.
when you wander through the back yard...squirrels throw acorns out of the trees...
like bombs. 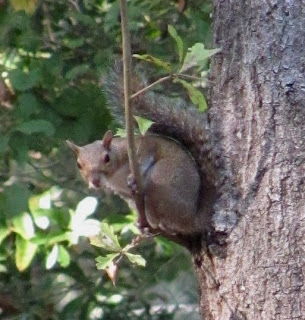 you have to dodge them constantly.
well, at least they're not throwing each other out of the trees.
but i did get hit in the head with an acorn the other day. yeah, finally.
i was wondering when that would happen. it was only a matter of time.
and, man! did that hurt!
most of the trees on our property are oak and pine...
with some azalea bushes scattered around...
not much going on with the brilliant autumn shades....
The day I see a leaf is a marvel of a day.
~Kenneth Patton
...except for the Oakleaf Hydrangea. the leaves are curling at the edges...
and showing hints of red...orange and brown. 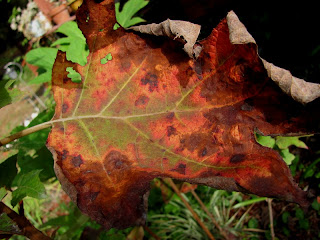 because of the cooler weather, i'm not seeing as many
frogs, butterflies, dragonflies...or other insects.
the Anoles are still hanging out...soaking up the sun during the day.
i caught this one in the midst of changing from brown to green. 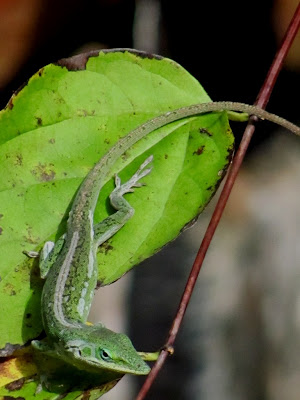 Study nature, love nature, stay close to nature. It will never fail you.
~Frank Lloyd Wright
the owls and the hawks will stay with us through the winter. 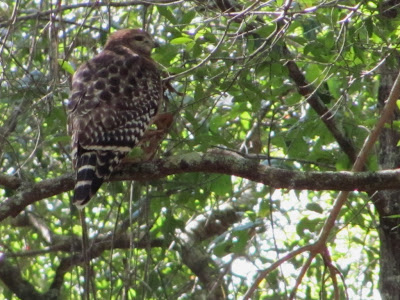 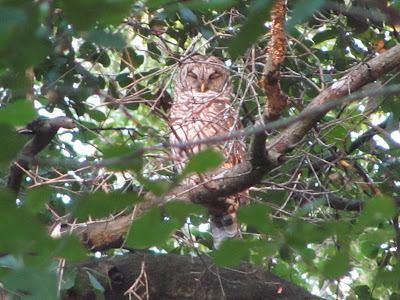 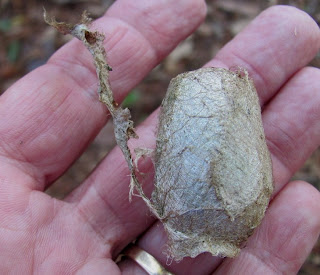 it seems they're from the Polyphemus caterpillar.
after secreting an enzyme that helps dissolve a flap in the cocoon,
the emerging Polyphemus moth wiggles its way out.
awesome looking moth. large wingspan, from 4 - 6 inches across.
large 'eye spots' on the hind wings, to scare predators away.
o~o~o~o~o~o~o~o~o~o
besides the bugs...which are starting to seek refuge from the cold -
by moving indoors - doing their best to remain inconspicuous...
i thought i might quickly introduce our other family members.
you may have already met Milo.
indoor/outdoor...around 14 yrs old. loves to climb trees.
sneaks up on lizards...squirrels...snakes...
anything that's smaller than her...and moves. 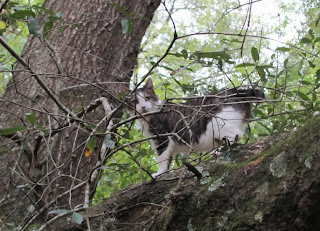 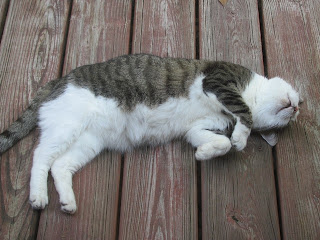 (milo trying to get used to the time change too. ha!)
o~o~o
Monty. ball python.
i did a post a while back showing him devouring a rat.
monty's been in the family for about 13 yrs.
he has found his way out of his tank a couple of times.
fortunately...found within a few weeks. 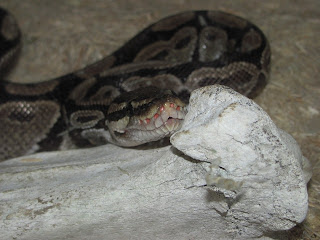 o~o~o
and lastly, Ozzie...the oscar fish. we adopted him about 8 months ago. 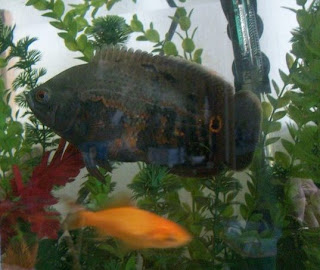 he's a fast growing...messy & voracious eater.
and we love him! 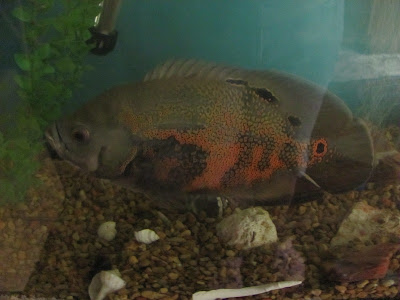 he gets a kick out of rearranging the plants and bigger rocks in his tank.
he likes to push the heater sideways.
he smacks the top of the water when he wants attention...or food.
time to upgrade...to a bigger tank.
o~o~o~o~o~o~o~o~o~o
before i go...here's an update on the owl pellets.
if you happened to read my last post, 'the tiniest bones',
then you'll know i found a couple of pellets...dissected them...
and cleaned all the bones found within the pellet.
the bones are so fragile. some of them breaking apart as i try to pick them up with tweezers.
anyway, thought i'd post a picture of the bones after cleaning.
look closely...you can see a couple of very small jawbones...
one still has teeth in it!!
wow!!
and the little claws...legbones...skull parts... 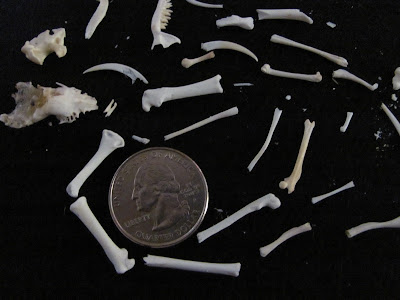 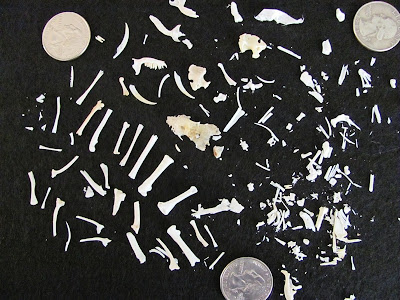 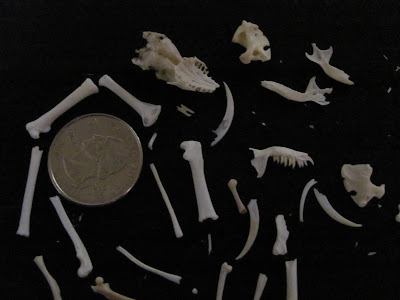 'til next time...
keep wandering. be safe.
stay cool.
laura  :]
Nature has no mercy at all. Nature says,
"I'm going to snow. If you have on a bikini and no snowshoes, that's tough.
I am going to snow anyway."
~ Maya Angelou
Posted by laurak/ForestWalkArt :)