the first thing i mentioned in my previous post was about that monster of a spider web outside our front door. last night we saw the spider in the middle of the web. BIG bulbous-bodied with markings on it's back! and hairy legs! it took some research...but i finally figured out what kind of spider it is.  an Orb Weaver! they're nocturnal so it's no wonder we didn't see her until night. they're pretty interesting spiders...you can read more about them here!
ANYWAY i tried to get a good picture. hmmm...i haven't used my camera much at night. obviously i need to start practicing!  a little blurry...but it'll do... 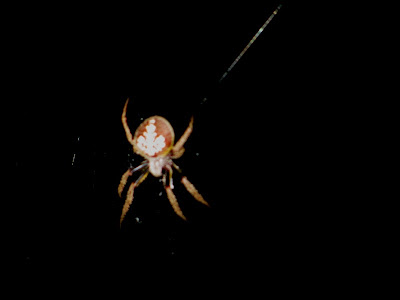 here's a picture of...a young cardinal?? i spotted her in the yard yesterday on a 'downed tree trunk'. i say 'young' because she looks a little disheveled...like she has some new fluffy down feathers...and what's sticking out of her beak? feathers? 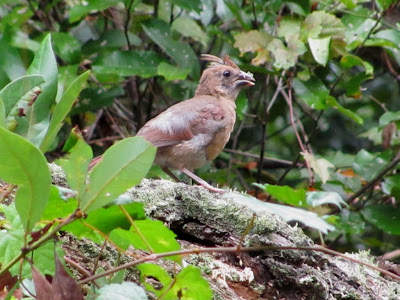 and a pretty cool up-close shot of a dragonfly! 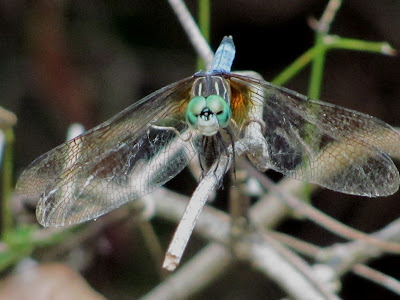 and here's a stink bug sitting on the handle of the garbage can!
i heard on the news the other night about a stink bug infestation...how these bugs are coming back...in big numbers. come to think of it...i have seen more than usual over the past few months. not nearly what i'd call an infestation...but, yeah, more than normal. 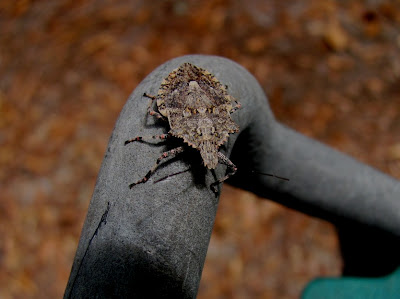 i  have a few more pictures of the owl...who was in the  backyard again yesterday afternoon.
so i'll post a few of those pictures next time.
ok...gotta get ready for work!
honestly, i woke up thinking today was sunday.
sam just came out of the bedroom...dressed for work...
i had to do a double-take...wondering WHY he was awake so early...and wearing his work shirt!
yikes!  better get going!
stay cool...laura  ☺
Posted by laurak/ForestWalkArt :)