BBBBbbbbbbr. what a cold weekend.
at least when we go camping...we sleep in a camper that slides in the back of the truck...
and not in  a tent.

we arrived at Gold Head Branch State Park friday afternoon.
(only about a 40 minute drive from home)
when we checked in, we noticed all the brochures on local wildlife.
gopher tortoises, coyotes, snakes, black bears, fox squirrels, white-tailed deer.
"YEAH!"  i thought  "not just scat & track pictures!"


while setting up the camper, we let milo out for a little fresh air. 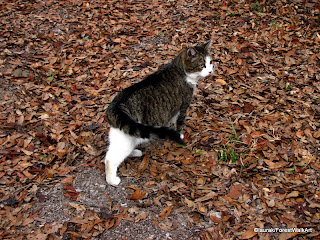 she's good. she stays. she listens. (well, most of the time.) 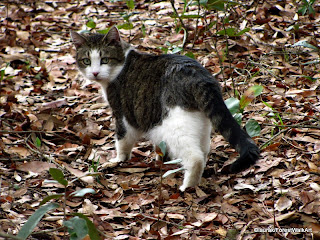 with milo back in the camper, we rode our bikes to Big Lake Johnson.
this park has 2 main lakes.  dry lakes.

both Big & Little Lake Johnson are fed by the seepage of the springs from Gold Head Branch Ravine.
prolonged drought and the pumping of water for industries, communities & irrigation
are sucking parts of florida's aquifer dry.

these lakes are pretty much nothing other than dry lake beds.
according to a ranger we spoke to, the lakes haven't been this dry since the 1930's.

we walked around the perimeter.
i was shocked & saddened to see the remains of so many turtles.
scattered all over.  just empty shells.
due to loss of habitat & food provided by these lakes.

finally we heard some sounds of life.  sandhill cranes flying in to settle for the night
somewhere on the other side of the lake...past the tree line ... 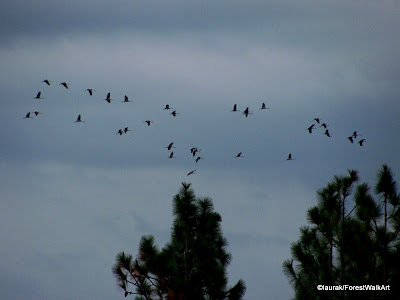 small trees & grass growing where there used to be water. 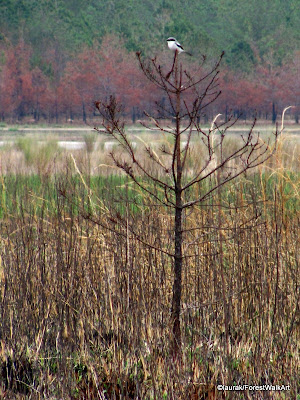 UPDATE: my suspicion was correct!
this is a SHRIKE!  thanks Bob @ Birds & Nature in the Forest of Dean  for confirming!
ALSO confirmed as a Shrike by TexWisGirl @ The Run*A*Round Ranch Report
THANKS!!

(i'm not a birder. i looked through my bird encyclopedia...twice...
and am not sure about this one!  i can't find a bird with these exact markings.
the closest i saw was a Shrike?!  any ideas? please say.) 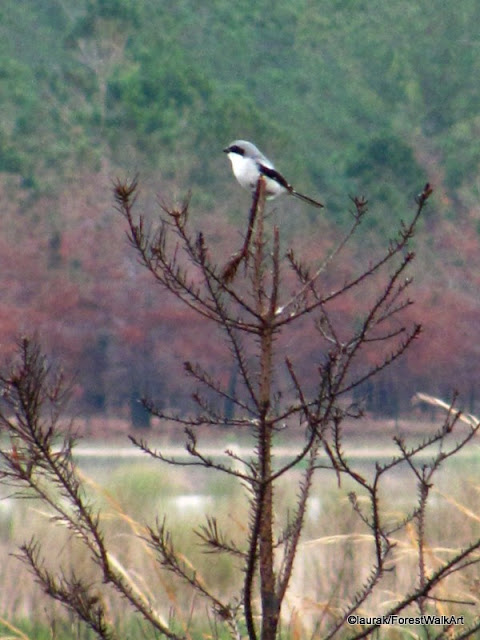 back at the camper milo is passed out. 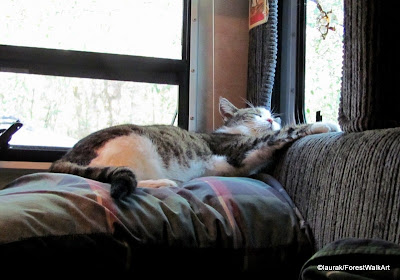 on her window seat, atop her pillow throne. 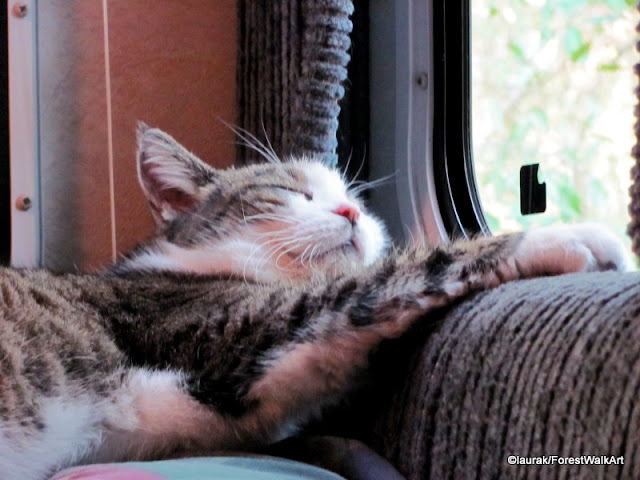 dreamily...she opens her eyes and heads outside. 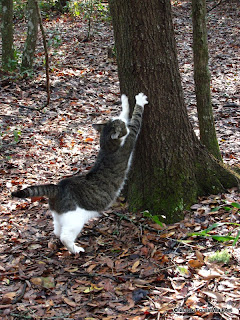 saturday.
colder & windier.  getting colder as the day goes on.
we decide to hit the trails early.
hiking from Little Lake Johnson down into the Ravine. 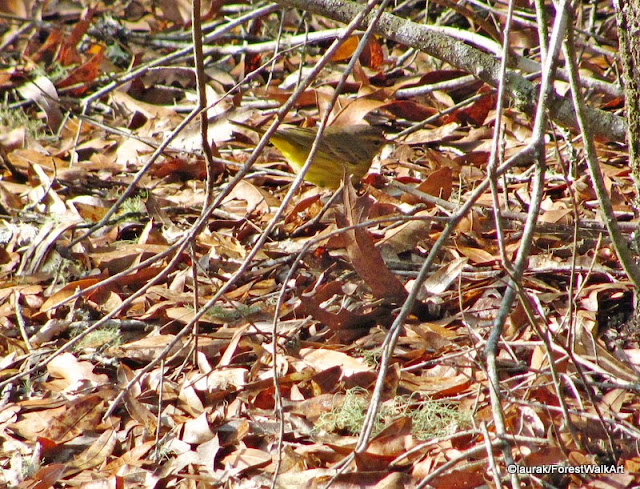 along the way...another guess...what bird is this? (a Prairie Warbler?)
YES!!  confirmed as a Warbler by TexWisGirl @ Run*A*Round Ranch Report
AND, not JUST a Warbler...but confirmed even further...to be a Palm Warbler by
Kathie @ Kathie's Birds!! 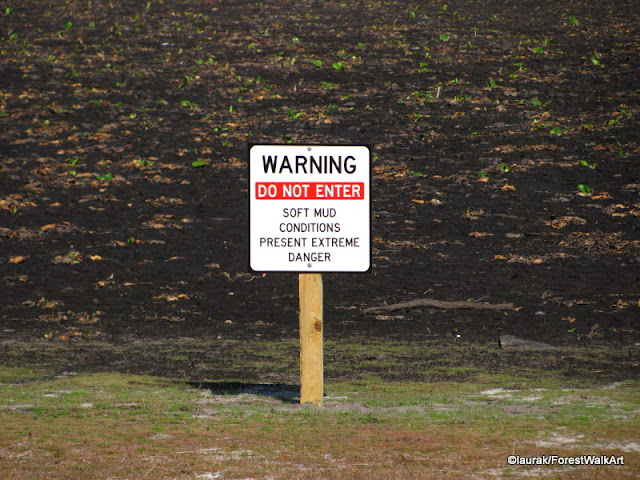 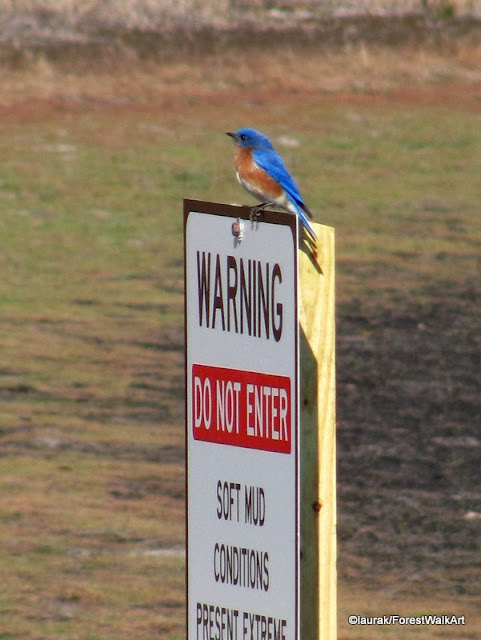 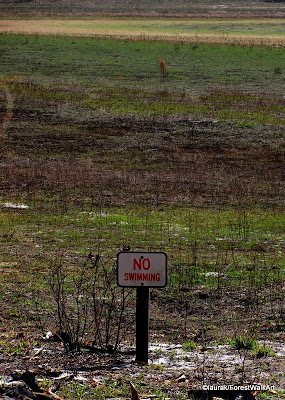 passing the lakes and moving into the pine forests...we head down to the Ravine...
where it's cooler, damper, lusher, greener.

at the turn of the century there was enough flowing water to operate a Grist Mill.
now all that remains is a small slab of concrete.  and a marker sign. 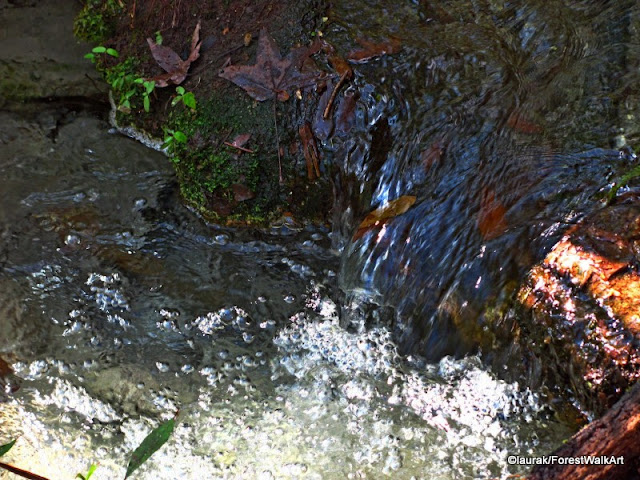 at the topside of the Ravine...
we were lucky enough to catch a glimpse of Sasquatch!!
and even luckier to snap a picture! 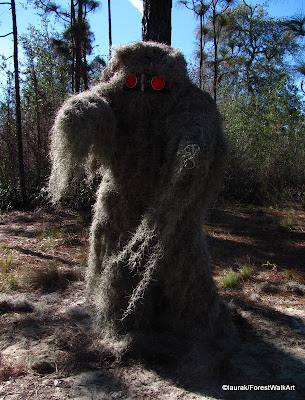 (looks to be the same kind of plant we have at home...in my previous post...
blooming right now...the Flatwoods Plum) 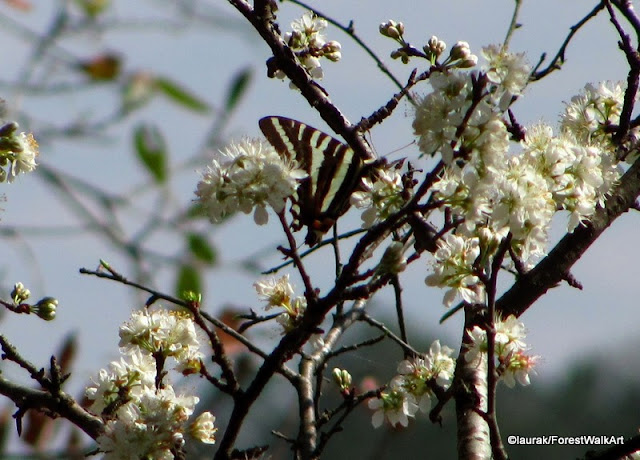 ok. almost done.
get your wooly cap & gloves 'cause we're supposed to have a hard freeze saturday night.
down in the 20's.

Weekends are a bit like rainbows;
they look good from a distance but disappear when you get up close to them.
~John Shirley

a moth flew into the camper. 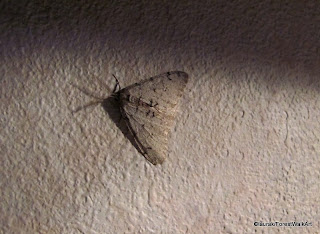 we let him spend the night.

ice.
on the ground under the dripping spigot. 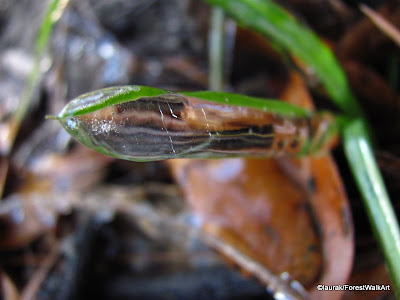 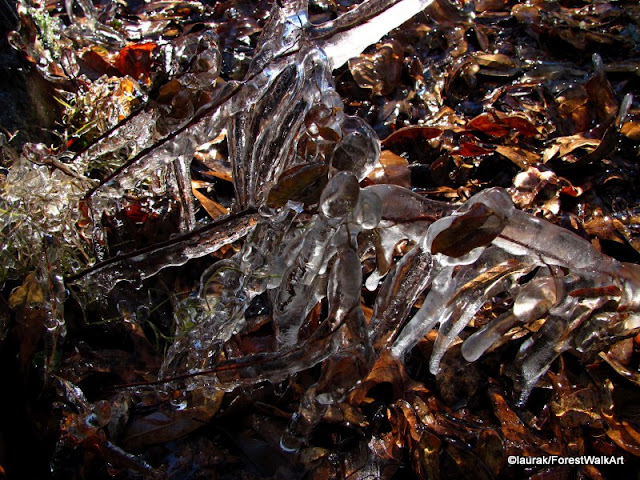 SO WHAT WOULD ONE OF MY POSTS BE WITHOUT A SCAT PICTURE?
you thought you were getting away...or at least hoping...there'd be NO poop this time.

milo used her litterbox in the camper saturday night.
this is what i saw sunday morning. 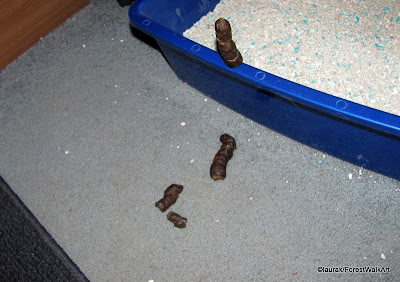 not only did she completely miss the box...
but NO WAY could she do this again...even if she tried.
ONE PIECE of POOP  STANDING STRAIGHT UP ON THE EDGE!

well. hope you enjoyed wandering Gold Head Branch Park.
we did.  it was cool.  literally.

YIKES!  time flies when you're doing a post!
i have lots of stuff to get done today.
so i'll catch up with you later today...or some time this week...at your place.

"Love makes your soul crawl out from its hiding place."
~Zora Neale Hurston 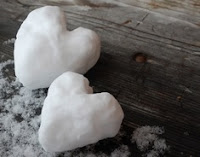