how could i say no.

it's october and mr bOnes wanted to do this week's 'friday's fringe'.
in fact, he wants to cover every friday this month.

he begged.
nothing worse than a begging skeleton.

last year, in october of 2011...mr bOnes made his debut in a post:
from the clouds to the moon with mr bones


first we went out back, and as soon as he saw this red mushroom...
he just had to have his picture taken with it! 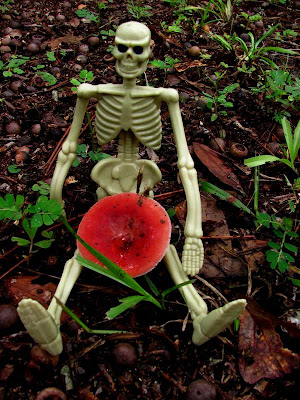 and then he devoured it!!

i followed him out front, where he plopped himself in the fluffy 'blue mist'...
and we had a photo shoot.

he liked this one the best. 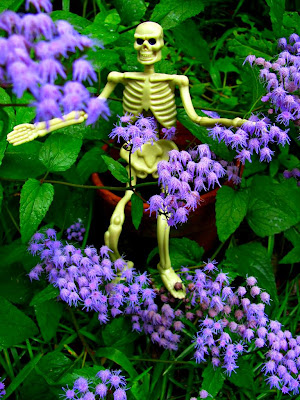 i did suggest that he roll around in the dirt first...
get a little muddy...maybe jump on the grill and get a little blackened...
i mean, you gotta admit, he is a bit clean looking for a skeleton!

but he sure is happy.  it's like that smile is pasted on his face.
is it a smile?  or more like a sneer?

“If you look in the mirror and you say his name 5 times,
he'll appear behind you breathing down your neck.”
Candyman (1992)  (Claire)


thanks for stopping by on...