a bevy of bugs...and other meanderings 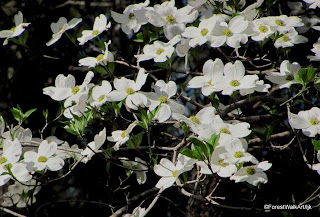 (dogwood...blooming all over town...)
every day, little crawly...
creeping...
flying...
critters
are making their way out of hiding!
the sun's warmth is bringing out new growth on plants...
budding...flowering...and the ground is heating up.


this week...between appointments, chores & errands...
i was able to get some pretty cool pictures...wandering around the yard...
B U T T E R F L I E S!!
and grasshopper, lizards, woodpecker, inch worm, stink bug... 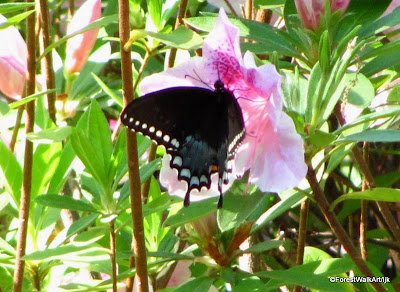 (the Tiger Swallowtail feeding on an  Azalea) 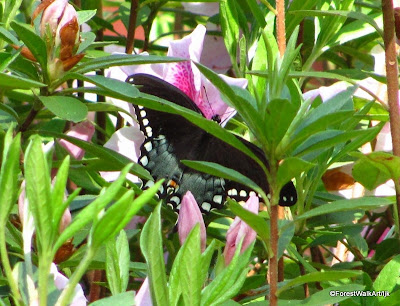 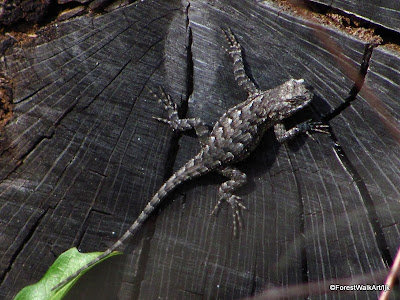 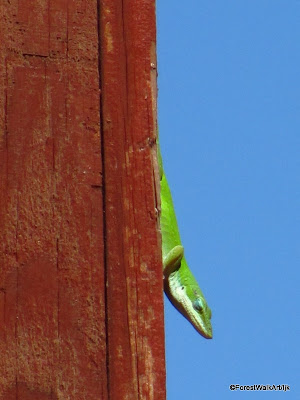 (anole, sunning himself on the side of the house) 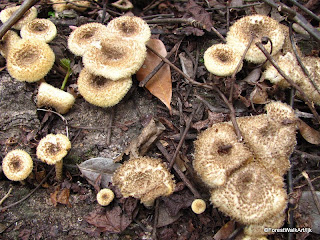 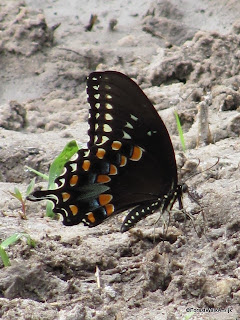 (Spicebush Swallowtail...at mud pit, up the road...)
"Butterflies are self propelled flowers."
~R.H. Heinlein
oOo
one day...in the late afternoon...when i was out back watering the plants...
i heard the sound the woodpecker makes as he's hopping down a tree, toward the ground.
i dropped the hose, grabbed my camera...and kept my eyes open.
wow! they move so fast! up and down...side to side...backside & front side of the tree....
finally. i got him!  a little blurry, but it was the best i could do. 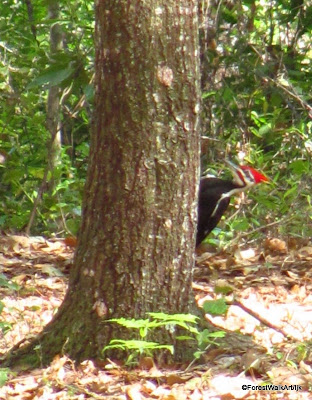 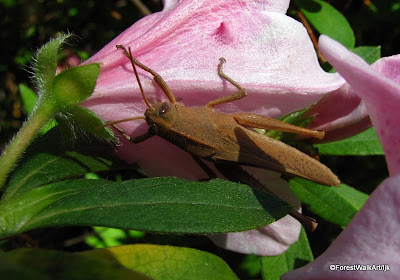 (grasshopper...on the Azalea bush)
this is a cardinal.  the picture was not what i expected.
sometimes it's like that. you see things one way,
but then the picture comes out totally different.
almost a silhouette.   pretty cool blunder, i thought! 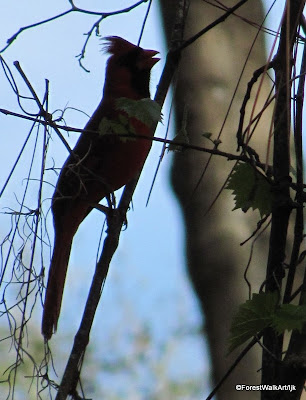 he's singing...i caught him in mid-note!
oOo
about a week ago, sam and i forged our way through the underbrush and
downed trees...out back.  i love to go wandering out there...even though i inevitably
come home with bleeding scrapes from the thorny vines...and a tick or two.
the maple trees back there are dropping these little seed pods.
well, they don't really drop...but when they fall from the trees individually,
they twirl to the ground like a helicopter!
as soon as i saw them...i was reminded of when i was a little kid.
we called them pinocchio noses.
why?
because we'd peel open the end with the seed...and it would be sticky inside...
then we'd stick them on the end of our noses! 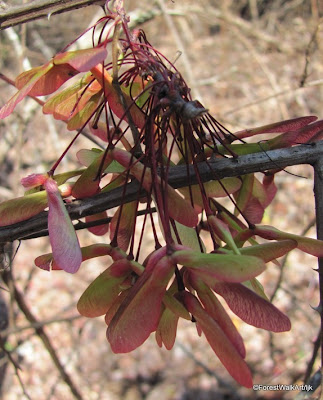 cwazy kids!  the ones we had up north (NY) were way bigger!
or maybe i was just way smaller... 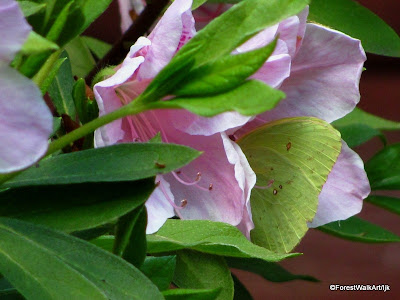 (a Cloudless Sulphur... also on the Azalea) 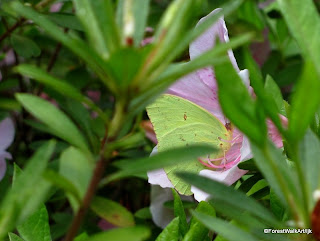 "Flowers and butterflies drift in color, illuminating spring."
it's kind of hard to get a good look at this little guy.
i couldn't get too close...and my ZooM doesn't work too good on small things.
but this tiny butterfly has FUZZY ORANGE LEGS!! 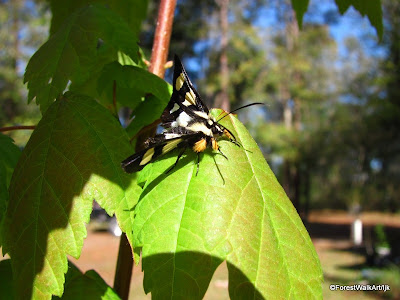 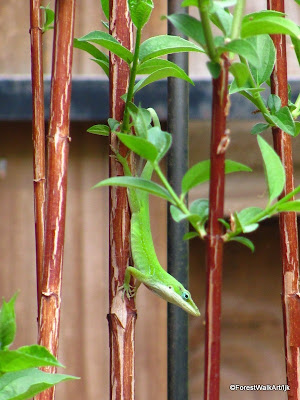 (another green Anole...on the Mock Orange...right out the back door) 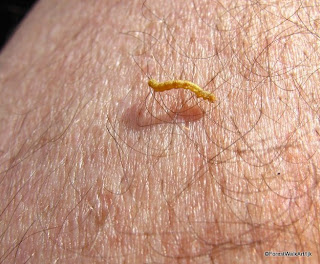 yes, they're falling out of the trees! inchworms!
well, maybe not actually falling...but dangling...
slowly lowering themselves by way of their silken thread... 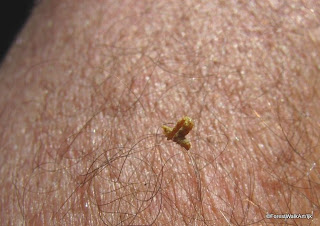 (inchworm on sam's arm)
oOo
ok, so you know about my weird art...and collections...
but i have another obsession i've never mentioned.
poop.
(WHAT?!)
yeah, you heard me. i like to take pictures of poop. scat.
(WHY?)
so we can ID it later. so we can tell what's been here - or there.
so we can see what critters we've missed.
i have quite an array of poop pic's!
well, sam...being the jokester that he is...
suggested i do a post titled
"one crappy post".
ha!   hmmmmm...sounds like a plan.  :D
oOo
i'm still working on those deer jawbones. 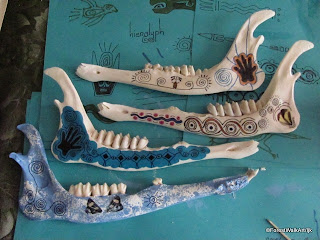 oOo
leaves.
their colors, shapes, textures...
intrigue me.
especially when they start to disintegrate...
when all that's left are the veins...the leaf's skeleton...i'm fascinated.
or when they're riddled with tracks of some mysterious insect...or disease...
or a leaf in the early morning...covered with dew...or rain water...
i am captivated! 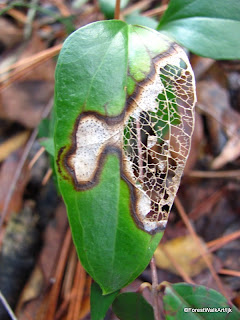 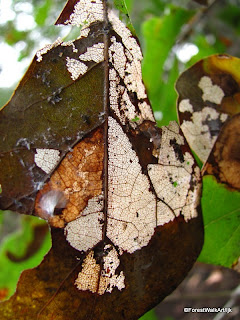 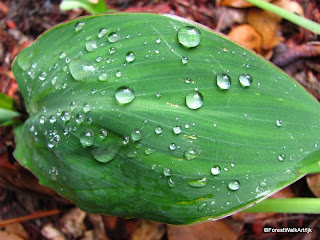 "Do not go where the path may lead;
go instead where there is no path and leave a trail."
~Ralph Waldo Emerson 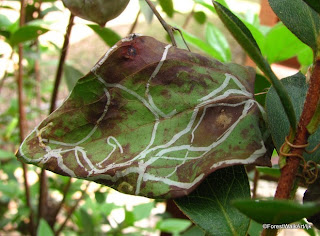 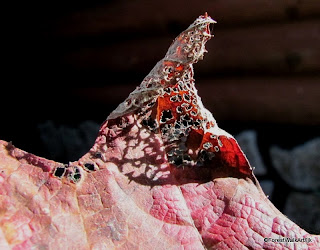 oOo
another 'yard' plant blooming!
this is a succulent. i have a lot of them...in pots.
they're easy to grow and new ones will sprout  from a dropped leaf.
they have these really pretty little flowers.

(Echeveria Carnicolor)
oOo
ONE more thing.
the first stink bug of the year!
and he's a big one...for a stink bug anyway!
they're so WEIRD...so prehistoric looking! (stink bug on a Bromeliad)
oOo
uh-oh...i lied.
no, i didn't.
i just forgot to mention...
one LAST thing.
remember - last sunday we went to the races. the drag races.
some of those cars speed down the track at OVER 300 mph!
300 mph, under FOUR seconds...and under a quarter of a mile!
aaaaaah...i hate to admit it...
but i love the smell of NITRO in the morning.
i love how your bones shake when these TOP FUEL cars start up!
you can FEEL the air around you being sucked down the track...
anyway, if you're interested...you can click here to see some race day pic's!
oOo
and so. this is the end.
my next post, which i'm going to try to do some time during the week...
is all about our hike to Alachua Sink...which is LOADED with alligators!
sneak peek --> 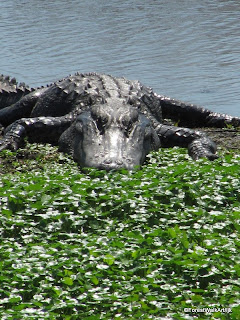 ((hopefully...i'll get to YOUR part of the world tomorrow morning...))
thanks for wandering...
stay cool.
have a safe journey...enjoy the ride!
:] laura

"May you have warm words on a cool evening,
a full moon on a dark night,
and a smooth road all the way to your door."
~Irish Toast