it's saturday morning. early.
no sun peeking over the horizon yet...or through the trees.
it's been a busy week.
yay!  i picked up 6...yeah, SIX...new 'once a month' clients.

today we're helping a long time client of mine move. finally.
out of an abusive relationship...into a new place.
today's the only time we can do this for him...
because his 'partner' isn't home right now.
in fact, his partner got so messed up on crack...
he's having a stay in jail at the moment.
so after a few years of trying to convince my client to 'get out'...
he's finally doing it. now's his chance. now's the time.
we have a truck and enclosed trailer...and will be there early this morning
to help pack & load all his stuff.  so i better start typing fast.
OH, and tomorrow we go to the GatorNationals!
the NHRA drag races.  we go every year...usually for all 3 days of races...
this year only one day...sunday...for the finals.
we'll be there from early morning 'til evening, so i better start typing faster!
oOo 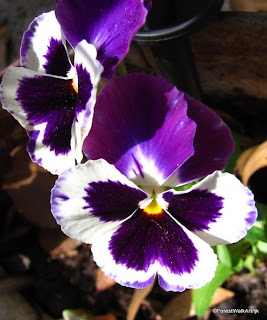 pretty pansies.
at least they like the cooler weather...because all of a sudden it's
gotten cooler again...down to low 30's at night.
the azaleas like it cooler too...the bushes are covered with buds...
some are starting to open! 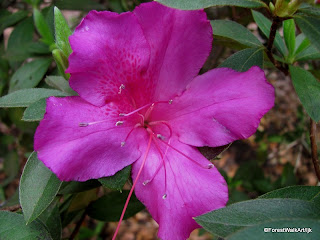 earlier in the week it was raining...pouring...we really needed it.
i keep a HUGE bucket outside to collect rainwater in...for watering plants.
i noticed this little june bug got stuck in there...luckily he found his way onto
the safety of a leaf...and was floating round and round... 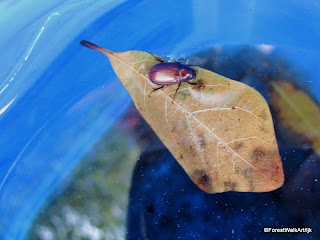 yeah, yeah...don't worry...i'm not THAT sadistic...i only watched him for a little while
and then took little june bug and his surfboard out of there, and set him on the ground!  :-]
BUTTERFLIES!
i've been seeing them. they fly through the yard...
like they're on a mission...rarely stopping.
swallowtails...the Eastern Black and Tiger.
i'll keep trying to get a picture...maybe next time.
but i did get a picture of the tiny Red-banded Hairstreak!
first time ever i was able to snap one of these. 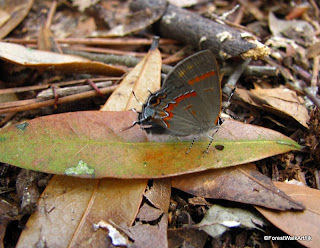 he  must have just emerged from his cocoon...or whatever...
because he was just sitting there...cleaning himself...rubbing his legs together...
and let me get THAT close to get this picture!
Tent Caterpillars.
know why they're called that?
because they spin a web-like tent in the crook of a tree... 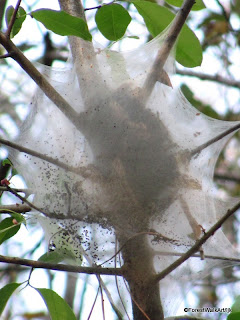 eventually hundreds of these little hairy caterpillars climb out...
and down...foraging for food. 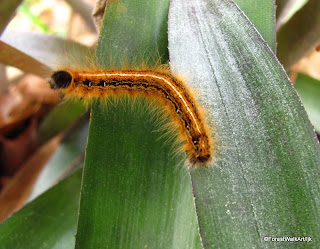 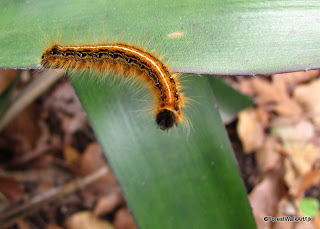 ok...now just take 59 seconds to watch this time lapse video from You-Tube.
it's kinda creepy...it might make your skin crawl...but it's amazing!
(yikes! it's starting to get light out...i have to hurry!)
we're not worrying too much about the caterpillar invasion.
we have enough birds around to take care of it...keep it under control. 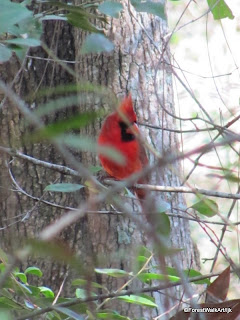 (male cardinal)
AND of course we have LOTS of lizards! 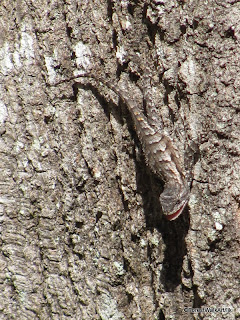 LOOK! he even has his mouth open...he's salivating...
just waiting for one of those  caterpillars to cross his path!
well...you know i wanted to ramble on...i'm good at that...
BUT i just know my client's going to call any time now. for an early start...
so i have to get ready...
The human race has one really effective weapon, and that is laughter.
~Mark Twain


ONE more thing...ONE of my finished JAWBONES! 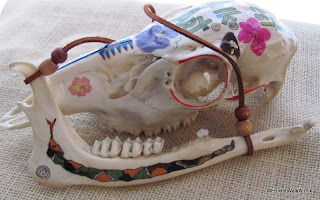 ok..well, maybe i can get back here some time during the week...
i have more pictures...quotes...
so, 'til then...
stay cool.
have a safe journey. enjoy the ride!
:] laura 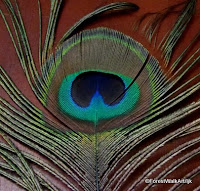 We are what we believe we are.
~C.S. Lewis
(once again...mother nature strikes.
my thoughts go out to the people of Japan and all those affected
by the devastating earthquake and tsunami.
a moment of silence...)