hiking at our in-town prairie

last weekend we packed up the camper, loaded up milo,
and drove 25 minutes to the other side of town...to Paynes Prairie Preserve State Park.

it would've been nice to get a camping spot at a park a little farther away,
but when i tried to make reservations a month ago...this was the FIRST and ONLY available spot!
so i booked it!

the prairie basin was formed when a number of sinkholes close together eventually merged.
for 12,000  years people have settled in this area.
from prehistoric times to Potano Indians, Spanish explorers, Seminole Indians...
followed by cotton farmers, citrus farmers and cattlemen. this land has been an irresistible lure
to explorers, adventurers...hunters/gatherers...farmers...Native Americans & Europeans.

BACK in march we visited another area of the park...The La Chua trail...
where we saw LOTS of gators and the wild spanish horses.
((check out the post for more: alligators-wild-horses-turtles-and the moon))

THIS weekend, we were on the 'camping' side...with trails, lake wauberg and a nature museum.

so, lace up your hiking boots... 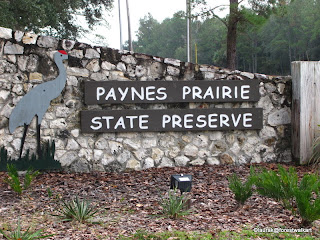 our ONLY deer sighting was on the way in...it crossed the road right in front of us...
my camera was in the case...in my lap.
the deer was faster than me!  no deer picture this time. 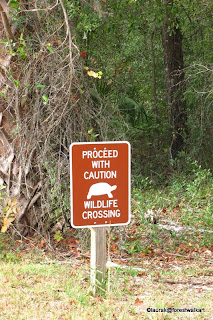 (we had been warned...due to the low water level in the lake, the wildlife will be scarce.)

“The clearest way into the universe is through a forest wilderness.”
~John Muir

after milo goes inside...we'll head down the trail. 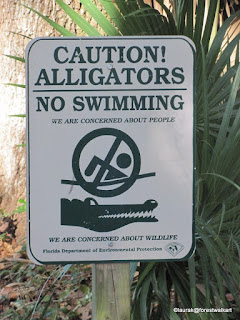 you don't have to tell me twice... 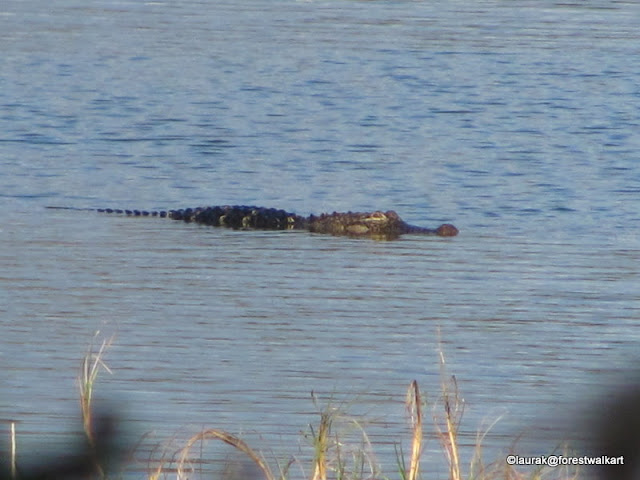 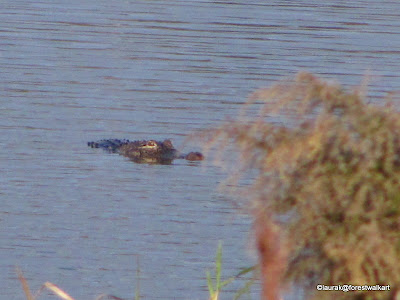 
since so many of the trees we have here in north florida are the pine,
it's really nice to see the autumn changes in the Sweetgum.


ok, we made it to the visitor center/nature center, where they have pictures and artifacts
explaining the history of the prairie...the land...it's people.
cool stuff...to learn...see...touch... 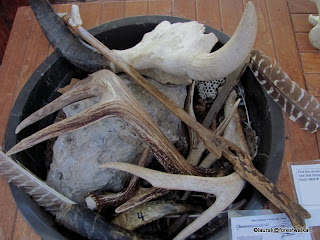 ((i have to give mention here to TexWisGirl @ The Run*A*Round Ranch
for letting me know that i had my skull labels reversed!! duh! they're fixed! THANKS  T!))


a map from 1883.
if you spot The Sink/Alachua Lake, just south of where it says GAINESVILLE...
that's about where we're at right now. 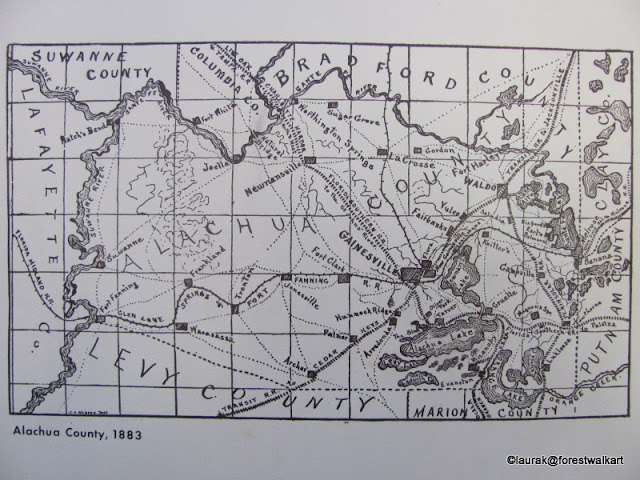 follow the RR out of G'ville, going north-east, and you'll see

Fairbanks...that's where we live.  stay on the train, next stop is Waldo...which nowadays is
best known as a Speed Trap. there's even a warning in the AAA trip book! 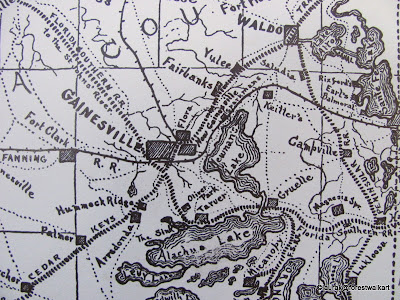 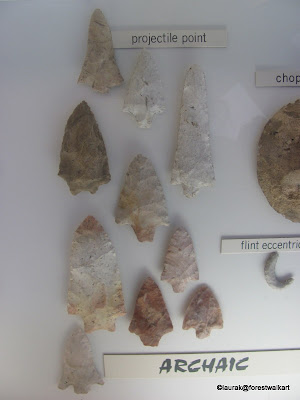 walking out onto the observation deck...looking out over the prairie basin... 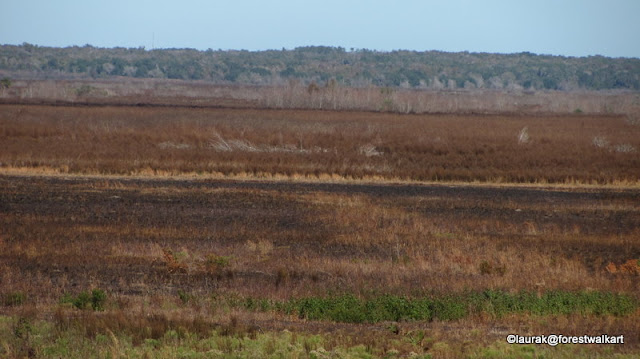 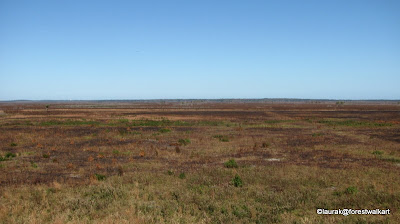 back on the trails...


the Jackson Gap trail, was named after a pioneering cattle rancher at the turn of the century,
Archie Jackson...who moved cattle through here.
a nice fixer-upper...huh? 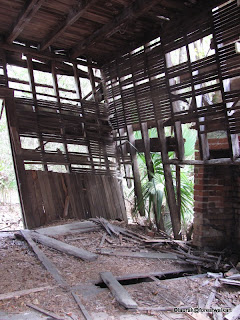 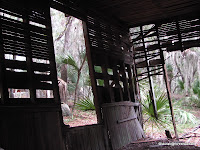 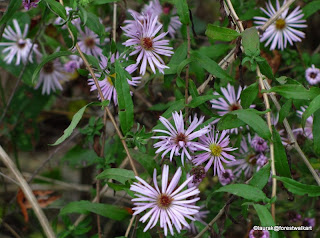 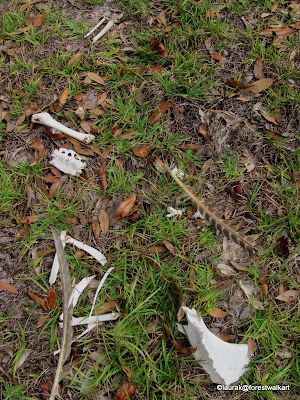 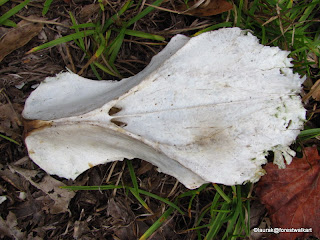 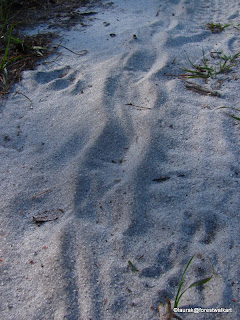 (OK! i did it again! Kathie @ Kathie's Birds has corrected me...and she knows her birds!!
the are NOT geese...they are SANDHILL CRANES! thanks kathie!)  :)

and where there's Wild Boar...you're bound to find... 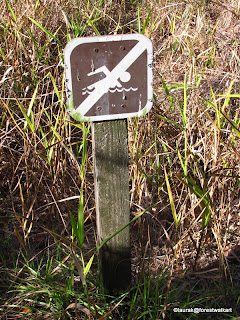 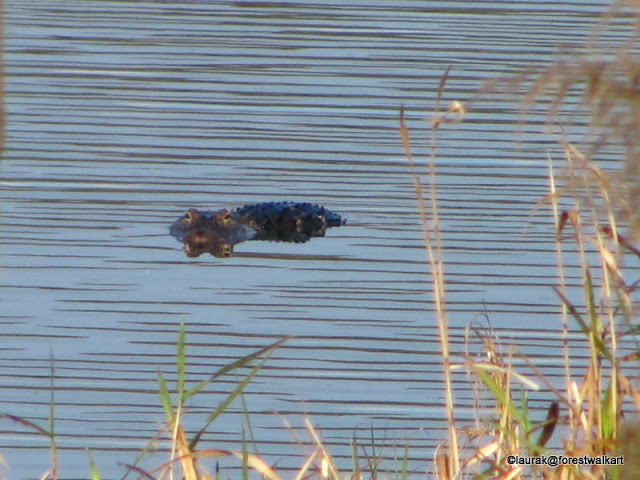 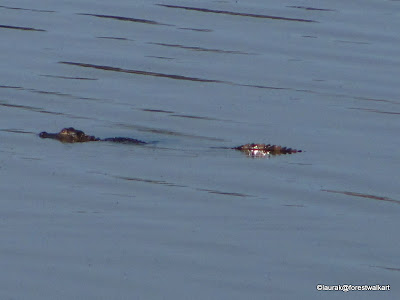 WHEW!  we're almost back to the campground...
there's the sign! 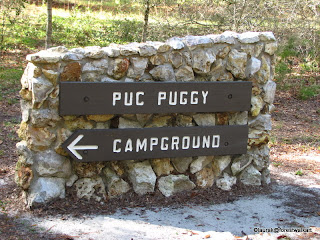 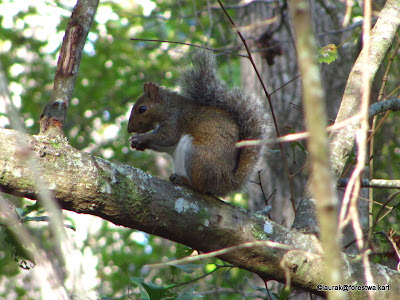 and here's Milo...
sitting on the step up to the bed...patiently waiting to be let out.
(remember, we have a slide-in. which means the camper sits in the bed of the truck.
our bed is over the cab of the truck.)

time to have a drink...relax...play scrabble or cards...while Milo sits and watches. 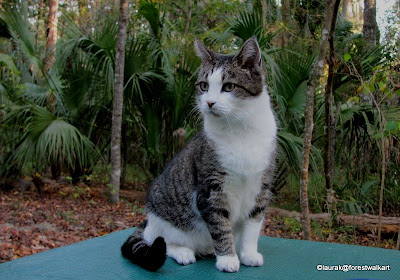 she's amazing really. she listens. she stays. she comes when you call her name.
(well, MOST of the time anyway.)


another perfect weekend...gone too quickly!
lucky for me, today was a slow one because i wanted to get these weekend pic's
on here before too much time passed.


have a nice week. have a safe journey.
laura


"It is our choices that show what we truly are, far more than our abilities."
~spoken by the character Albus Dumbledore.
J.K. Rowling, Harry Potter and the Chamber of Secrets, 1999.